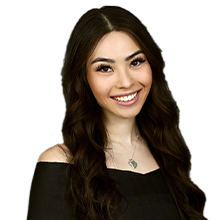 Allie O'Neill
Allie-Bama
Allie O'Neill was pursuing her biochemical engineering degree when she started betting MLB and NHL sides, totals and props. Through predictive modeling and data mining, she created algorithms that quickly made her successful in both sports. Allie loves the analytics of sports betting and constantly is trying to apply advanced metrics to get an edge. A 22-year-old diehard Crimson Tide fan, Allie (@allie_sports on Twitter) appears regularly on the "Early Edge" hosted by Jonathan Coachman. The show airs daily at 10 a.m. ET on SportsLine's YouTube page. For Allie O'Neill media inquiries, contact SportsLine@CBSInteractive.com.

All Picks from Allie & the Rest of Our Experts

ANALYSIS: Scoring an average of 3.76 goals per game, the Sabres are the highest scoring team in the NHL. In goal for Buffalo tonight is Ukko-Pekka Luukkonen, who's 10-2-1 in his last 13 games. Although, Luukkonen requires some offensive support, as he has a 3.48 GAA at home. The Canes counter with Antti Raanta, who already picked up a 5-3 win against the Sabres earlier this season, and he's 8-0-1 in his last nine starts. Carolina has won six consecutive games, including a 5-4 overtime win last night against the Kings, in which the Canes overcame a 4-1 deficit in the third period. At this price, the Canes money line is definitely worth considering, but I think the over will prove the more feasible play between these two teams tonight.

ANALYSIS: I approach this total hesitantly since Bruins games have been trending under, but Panthers games have been going over. All three games between these two teams this season have gone over 6.5, so I'll take my chances on that happening again with this goaltending matchup. Florida continues without both Sergei Bobrovsky and Spencer Knight, so Alex Lyon will be starting for the second night in a row. Lyon is 2-2-1 with a 4.07 GAA, and I don't think he fares well against the mighty Bruins. In Jeremy Swayman's lone start against the Panthers, he gave up four goals. While Swayman has dominated at home, he hasn't had the same success on the road. So, even on the second game of a back-to-back, I expect the Panthers to get at least a couple goals tonight. Consider a play on the over.

ANALYSIS: We just saw these two teams face off in Philadelphia, and the Jets won 5-3. Although, we may see a lower-scoring game with two different goaltenders tonight in Winnipeg. On the road, Carter Hart has a 2.70 GAA. At home, Connor Hellebuyck is 14-6 with a 1.91 GAA. Hellebuyck has seen seven straight, and 15 of his last 16 games stay under 6.5 goals. Not to mention, the under has been trending for both teams. Seven consecutive Flyers road games ended with six or fewer goals, as have eight of the last nine Jets home games. Bet on a low-scoring matchup at even money.

ANALYSIS: These teams already played in Chicago, and the Hawks picked up a 4-3 win in overtime. Jacob Markstrom started this game, and he gave up three goals in just barely over 20 minutes. Jaxon Stauber picked up a win in his NHL debut against the Blues, but I don't see him faring as well against the Flames. Take the over.

ANALYSIS: These teams have played twice this season, and the Canucks won both, 6-5 and 5-4. Actually, the Canucks have won all six games against the Kraken, and all but one of these ended with at least seven goals. I don't have much faith in Spencer Martin, who has a 3.86 GAA. On the other hand, Martin Jones is 0-1-1 against Vancouver this season. Both teams score and allow more than three goals per game, so expect a high-scoring matchup.