When the 2020 Stanley Cup playoffs begin in the NHL and which two hub cities they will be played in remain to be decided by commissioner Gary Bettman, but William Hill sportsbook re-released odds to hoist the Cup this week in the wake of Bettman announcing the expanded 24-team playoff format. Bettors at that book are crushing two teams in particular to win the Cup likely sometime in September: The Washington Capitals and Vegas Golden Knights.

The Capitals are +800 fourth-favorites on the moneyline odds to win the Cup – they won their first ever in the 2017-18 season but were knocked out in the first round the following year. Led by Alex Ovechkin, who tied for the NHL lead with 48 goals to win his ninth Rocket Richard Trophy, the Caps finished this shortened regular season with 90 points, good for a fifth straight Metropolitan Division title.

Alas, that division title doesn't quite bring the benefits it would in a normal season as the Caps are one of the East's top-four seeds (third) and will play round robin against No. 1 Boston, No. 2 Tampa Bay and No. 4 Philadelphia to officially determine playoff seeding in the conference.

A total of 14 percent of all money wagered at William Hill on the re-opened Stanley Cup futures odds prop has been on Washington. Seven percent of all tickets sold are on the Caps. A bettor in New Jersey dropped $20,000 on the Capitals at +900 (that bet helped move the Caps to +800) to win the Cup, which is this season's largest NHL futures bet taken at William Hill.

The Vegas Golden Knights, who lost to the Caps in the 2018 Stanley Cup Final in Vegas' expansion season, are +600 second-favorites to win the Cup. They are taking a league-high lean in tickets sold on the Cup odds prop at 11 percent and the second-most action overall in money wagered at 10 percent. Vegas is a top-four seed in the West and also will play round robin against the other three to determine seeding.

The Chicago Blackhawks and Montreal Canadiens are +10000 long shots to win the Cup. When the Hawks were priced at +15000, one Nevada bettor placed a $600 wager on Chicago. That would return $90,000. The 12th-seeded Hawks will open the Western Conference playoffs against No. 5 Edmonton (+2500 to win Cup).

So who wins the Stanley Cup 2020? And what long shot could stun the hockey world? See which teams to jump on to win the 2020 Stanley Cup, all from the advanced model that has crushed its NHL picks over the years, and find out. 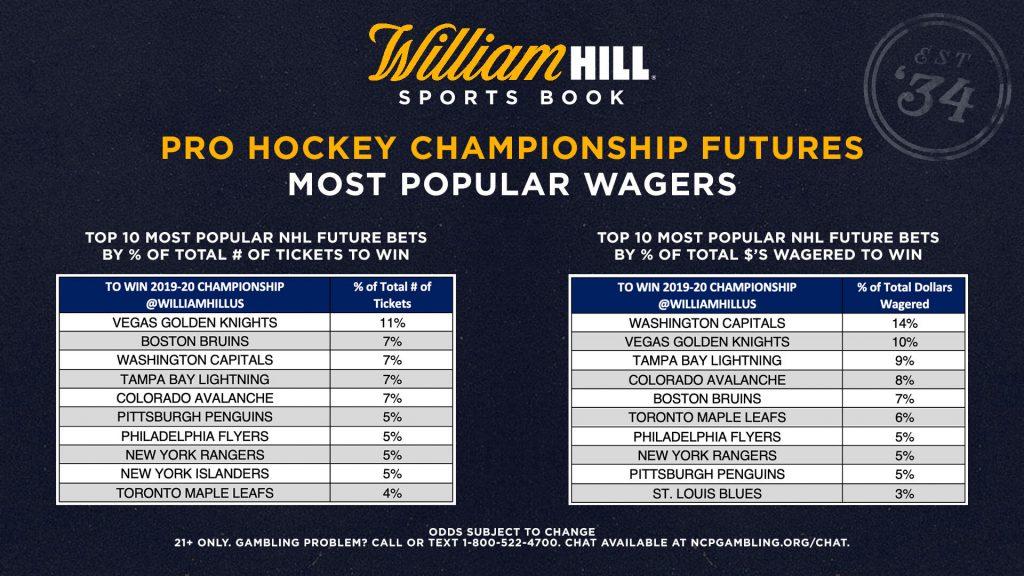